100 Japanese Movies in Japanese: The Empire of Corpses

As part of an effort to improve my Japanese and also get back into the habit of writing, we're starting a new series here. 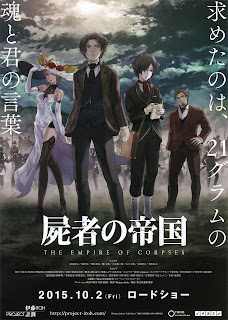 The first movie I watched was 「屍者の帝国」 The Empire of Corpse, a 2015 anime that is pretty damn sweet. Think The League of Extraordinary Gentlemen (the comics, not the terrible movie) only with buckets of existential horror and just regular horror thrown in.

Here's the plot so far as I could tell: It's the early 1800s and the world has been irreversibly changed by the experiments of Dr. Victor Frankenstein. While no one is able to replicate his ability to resurrect a corpse capable of thought and speech, mindless corpses are used for everything from manual labor to filling the ranks of militaries. There's one incredibly badass scene where two Victorian armies of corpses clash and it's a complete horror show.

In this world, we follow the exploits of Dr. Watson (yes, that doctor Watson) and his corpse companion, Friday. At the behest of Charles Babbage, they go on a world-trotting quest across the world with an American guy whose name I have complete forgotten for the research materials of Dr. Frankenstein and the secret to true human resurrection.

This movie is fucking sick. The fight scenes are great, the steampunk technology is awesome, and its vision of a world where the living dead outnumber the living paints an exquisitely distopian alternate past. I highly recommend it and award it 4 out of 5 stars. It loses a star due to some clumsy plot jumps and general pacing issues. I suspect that it's based on a comic or something and that they had trouble condensing a sprawling plot into a movie.

What I'm Pretty Sure Happened

What follows is possible spoiler territory, although it may also be completely incorrect.

As far as I was able to make it out, the heroes are being manipulated into Charles Babbage into helping him collect the materials for a doom device that will kill everyone and turn them into reanimated corpses. That way there won't be any more wars or crime or whatever, just a peaceful society.

Meanwhile "The One" (Dr. Frankenstein's original creation) is running around inciting the corpses to attack humans because he can control them like that for some reason. At first we're led to believe he's doing for revenge, but it turns out he's trying to resurrect Dr. Frankenstein and his fiancee. Also there's a female intelligent corpse with the same power to control corpses whose goal is to use Frankenstein's research to create a true soul.

Also, Dr. Watson's motivation is that he and Friday were students of Frankensteinology together, trying to prove the existence of the soul. But Friday died before they were able to finish their work, so Watson brought him back as a mindless corpse until he could discover how to truly bring him back to life.

Anyway, a fuckton of stuff happens in this movie and I'm not going to try and summarize all of it. In the end, Bride of Frankenstein gets a soul and hooks up with American guy, Watson does manage to bring Friday back to life but for some reason doesn't seem to know he was successful and teams up with Sherlock Holmes. Babbage gets killed and The One tries to use Friday and Bride of Frankenstein as vessels for the spirits of Dr. Frankenstein and his fiancee, but is thwarted by the heroes. Friday is truly ressurected, but I didn't entirely get why Watson didn't seem to know.

Okay, now I'm going to read the English Wikipedia entry on The Empire of Corpses and see what I missed.


What Did I Fuck Up?

So this movie was based on a novel, not a comic series. Still, adapting a novel into a movie may still explain the pacing issues.

The character I thought was named Babbage is named M. He's a government agent who blackmailed Watson into working for him because Friday was made illegally.

"Charles Babbage" is the name of the supercomputer used to upload programs into corpses that M uses to try and corpsify all humans.

The guy I thought was an American is a British agent called Frederick Burnaby who is apparently based on some real-life British adventurer.

The character I called "Bride of Frankenstein" wasn't a corpse, but an artificial life form created by Charles Edison (something I 100% missed). At the end of the movie, she changed her name to Irene Adler (dun dun dun).

Friday was apparently also referred to as "Noble Savage 007" - again, something I missed. I heard them refer to him as [something something] 007, but didn't catch that it was "Noble Savage."

The One's goal was to use the brainpower of all the corpses in the world to make a bride for himself. He wasn't trying to resurrect Dr. Frankenstein in Friday's body, but transfer his own consciousness in.